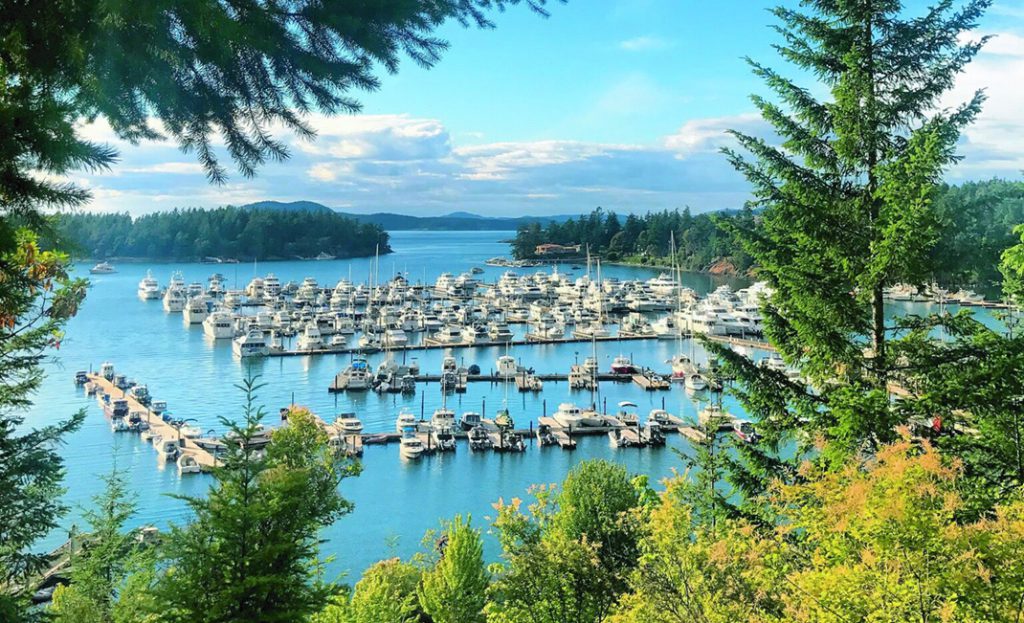 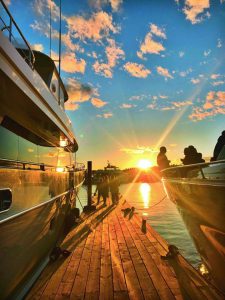 The annual Alexander Marine Rendezvous is held the third weekend of each year in picturesque Roche Harbor, Washington. The event is a fun-ﬁlled weekend for all customers of Alexander Marine, including our four major brands: Ocean Alexander, Tiara, Regal, and Pursuit.

The turnout for the 2017 Rendezvous was phenomenal with 49 boats and over 200 attendees. The theme of Rock & Roll was quite evident as you walked down the docks at Roche Harbor Marina. Aft decks were covered in vintage band posters, metallic streamers hung from railings, and a light show was even installed on one boat.

The weekend kicked off with the “opening act”, sponsored by Sea Magazine- a welcome happy hour on the docks where guests enjoyed Rock & Roll music, drinks, and appetizers while receiving their welcome packages and signing up for the events to come. Norm N. Nite, also known as “Mr. Music”, an accomplished radio personality, author, and trustee at the Rock & Roll Hall of Fame provided entertainment throughout the weekend.

The Rendezvous festivities continued Friday with a peaceful morning yoga class on the lawn, sponsored by Tiara Yachts, followed by a tasty champagne breakfast. A morning seminar was held by Sidepower and Imtra to educate guests on the signiﬁcance of stabilization. The ever so popular Chef Shaw’s cooking class started off the afternoon with wine and a delicious lesson on “romancing the hog”, sponsored by Delta-T. After the new expert chefs were full we sent the ladies off on a boat handling seminar held by Captain Steenkamp on our brand new Ocean Alexander 70e, sponsored by Boat Insurance. Sea trials, sponsored by Philbrook’s Boatyard, were held simultaneously so guests could get a feel for the ease of cruising and comfort of the new Regal and Tiara models available. The highlight of the weekend for most was the dinghy oyster outing to Westcott Bay Shellﬁsh Farm, sponsored by United Yacht Transport. 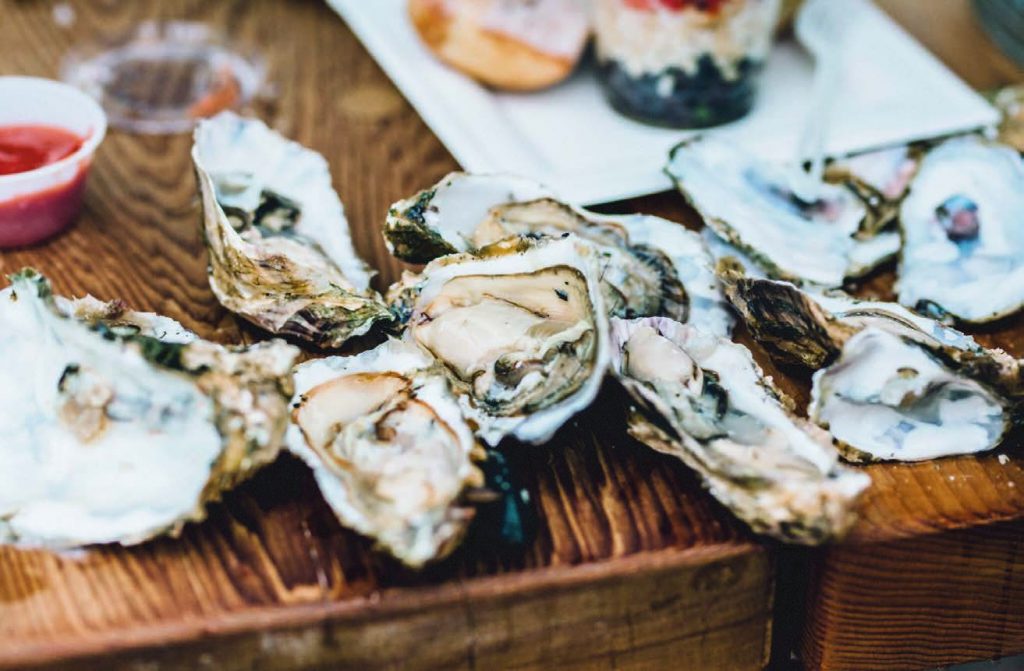 Everyone took a beautiful and short cruise in their dinghies to the newly renovated farm where we enjoyed wine and beer while shucking our own oysters with breathtaking views and a real homey feel. The oysters were delicious and the BBQ’d oysters were a deﬁnite crowd favorite. (We want to extend a huge amount of gratitude to Andrea and Erik Anderson for hosting us at their farm!) Friday ended with dinner on the lawn and a lively after hours event on the Ocean Alexander 70e that involved hula hoop contests, limbo, and lots of dancing on the docks, which was sponsored by Global Marine Insurance.

Saturday began again with a champagne breakfast complete with a custom omelet bar and the famous Lime Kiln donuts. Two morning seminars followed- one by Jim Adams who enlightened us on the history of the Ballard Locks and another from Greg Allen of S3 Maritime, which focused on marine electronics and Garmin. The fun continued at the “It’s All Wine & Games Event” sponsored by NW Yachting, where everyone was able to show off their Rock & Roll trivia knowledge. The world famous dinghy parade capped off the afternoon. We are excited to announce that we had a record number of dinghies this year! For each dinghy in the parade, AM USA pledged to donate $50 to the San Juan Preservation Trust. With a record of 27 we were able to present a check for $1,500 to the Trust. The Rendezvous weekend commenced with a “Rock the Dock Dinner” hosted by Norm N. Nite. Guests went all out this year, dressing up to the theme of Rock & Roll. The Best Dressed award was given to the King family of “Lanikai” who perfectly executed the costumes of KISS. The highly coveted Dinghy Parade trophy was given to the Morelands from “Island Star” and the Aft Deck-oration trophy was awarded to the Baiers from “Job Site”.

We had the best weekend, with the best people, and we cannot wait for the 2018 Alexander Marine Under the Sea Rendezvous! See you all there! 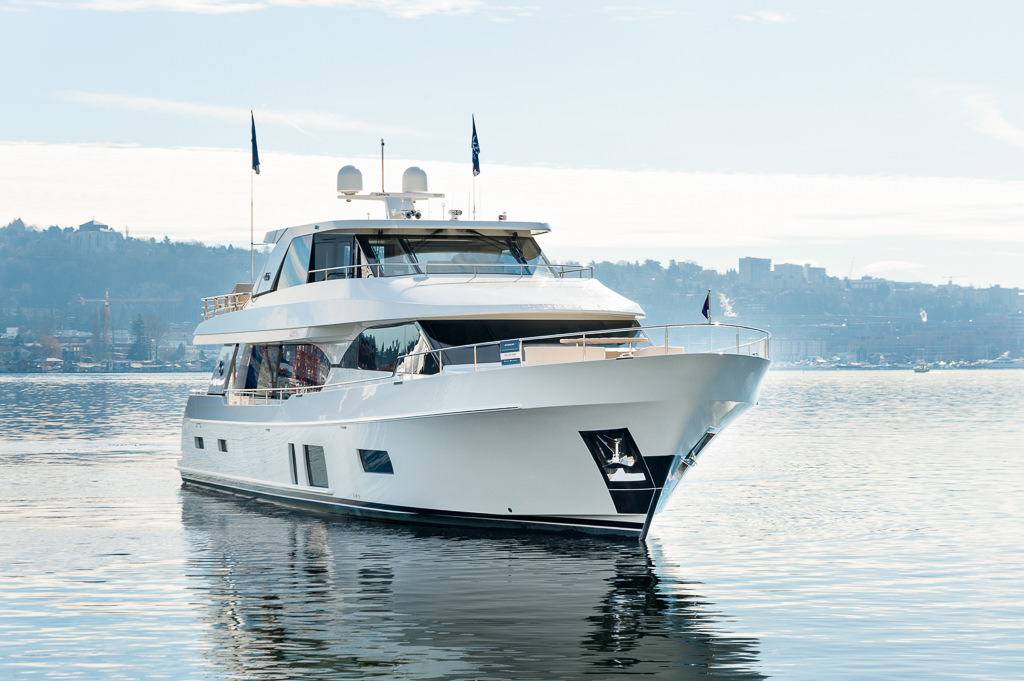